Fraud in insurance may happen at any point, from the second a client’s application is filed all the way up to claims. Insurance fraud statistics estimate that insurers lose a colossal $80 billion to frauds.

Nowadays, scams and abuse are becoming more frequent and omnipresent. The emergence of new technologies helps insurance fraud evolve, while, at the same time, fraudsters become more imaginative and refined.

Modern technology and perpetrators’ creativity make it more challenging for experts to uncover fraud. Although insurance companies have anti-fraud units, only a small portion decides to prosecute, which fraudsters readily take advantage of.

It might not be possible to protect the company, but it doesn’t mean that there shouldn’t be any attempt to prevent fraud. Just like the fraudsters, insurers ought to implement advanced tools and technologies.

Top Insurance Fraud in the US Stats and Facts

General Stats and Fact on Types of Insurance Frauds

Insurers classify frauds into several major categories: soft and hard, low-tech, and high-tech. Regardless of type, they can occur at any client touchpoint. Soft frauds aren’t typically planned and involve little to no degree of a criminal act.

Hard frauds, on the other hand, come as a result of a deliberate criminal act. They can be committed by individuals, organizations, and even providers. In terms of legislation, insurance fraud is regarded as a severe criminal offense.

2. International insurers lose $80 million due to fraudulent claims every year.

Scams are happening everywhere on the globe. The Coalition Against Insurance Fraud assesses the overall cost of insurance fraud at $80 billion, though the actual amounts might be even higher.

The modern technology era helps advance scams and makes it easier for fraudsters to commit crimes. Besides, they have become much subtler, preventing experts from unveiling them on time.

3. Less than 2% of scams end in prosecution.

What drives scammers to pursue this type of crime is the fact that insurers are unwilling to prosecute offenders. According to insurance fraud in the US stats, only a tiny portion — not even 2% — of frauds are prosecuted.

The reasons for avoiding prosecution include high trial expenses and unpredictable outcomes. But even though it might be costly and demanding, the prosecution may serve as a plausible threat and thus deter fraudsters.

4. Between 3% and 4% of insurance claims are fraudulent.

At the global level, approximately 1 in 30 claims is false. Such a figure further indicates that between 3% and 4% of insurance claims are fake.

5. Insurance scams cost US families between $400 and $700 in premium expenses annually.

The insurance industry represents a collection of over 7,000 companies that gain quite a fat profit on an annual basis. However, it is among the most vulnerable sectors in terms of scams.

Namely, every year, insurance scams impose expenses on US families amounting to between $400 and $700 in premium costs.

6. Healthcare scam costs make up around 3% of national funds invested in healthcare programs.

With trillions of dollars invested in the healthcare system annually, this sector is an easy target for scams. Health insurance fraud statistics show that this type of fraud, along with unnecessary medical tests or procedures, is yet another type of most frequent scams.

To add to that, the total expenses of healthcare scams amount to $68 billion every year, according to medical insurance fraud statistics. It is the entire nation that bears those costs as they comprise nearly 3% of the government’s $2.26 trillion of investments in healthcare.

What’s more, some experts estimate that the scam costs are even higher, reaching 10%, which is $230 billion of national taxpayers’ cash.

7. Medicare scam costs are estimated at $50 billion per year.

This federal health insurer is a frequent victim of scams and abuse. As Medicare fraud stats denote, the insurer loses at least $50 billion dollars to false claims, frauds, and abuse every year.

Considering the fact that the US government assigns over $700 billion to Medicare every year, these costs may not seem that massive. Unfortunately, they are repaid from the taxpayers’ pockets.

8. Two executives were imprisoned due to participation in fraud.

The duo submitted fraudulent invoices worth over $8.5 million to private insurance companies. They filed allergy testing and immunotherapy procedures that were unnecessary and were never carried out. The former executives were charged with fraud and sentenced to prison.

9. The US Justice Department regained over $2.6 billion from false claims.

The supreme law enforcement department in the US managed to recover a massive $2.6 billion from false claims lawsuits in health insurance frauds cases in 2019. This figure represents a slight increase compared to nearly $2.5 billion and $2.1 billion in 2018 and 2017, respectively.

It is undoubtedly a huge step in federal combat against fraud and corruption in the healthcare system. Namely, this was the tenth consecutive year that the US Justice Department gained settlements exceeding $2 billion.

Insurance fraud statistics suggest that insurers aren’t quite willing to involve law enforcement agencies when dealing with scams. Only 1 out of 3 agents would contact legal authorities, whereas 7% would refuse to report the fraud.

This could be the reason why there is only 1.7% of successful prosecutions of identified scams. The great majority of those cases are related to health and living benefits.

Conversely, 33.3% of insurers stated they would always report the fraud, whereas 59.3% would hesitate to do so.

Every year, insurance organizations lose 5% of their revenue to the most common fraud cases. Translated into cash, this percentage amounts to a whopping $1.5 million per case. The figures further show that a median loss per case is $125,000.

Here are the top 10 insurance frauds:

12. Insurance organizations earn over $1 trillion in premiums every year.

The whole insurance industry, consisting of over 7,000 organizations, gains a handsome profit of more than $1 trillion annually.

Taking into account the vast amounts of cash circulating through the sector, it’s no wonder why the national rate of insurance fraud is continually increasing. It’s the second-favorite target of fraudsters, immediately after banking.

13. The size of the international insurance scam detection market may rise to $7.9 million by 2024.

The worldwide insurance fraud detection market is predicted to increase from $2.5 million to $7.9 million in 5 years through 2024 at an annual growth rate of 25.8%. Since cyber-attacks on the insurance industry became more sophisticated, they tend to impose huge industry losses.

Thus, the need to expand the entire insurance fraud detection market is not surprising. Still, not all organizations seem to be aware of the significance of fraud detection.

Such an approach is more frequent in the Asia Pacific region, specifically in markets that have high fraud incidences. Individuals can also protect themselves from identity theft fraud by using the best ID theft protection services on the market.

15. 48% of companies discovered that their agents participated in frauds.

Insurance fraud sometimes requires an “inside job.” Almost half of insurance organizations uncovered instances where their agents participated in scams. Depending on the organization, the percentage of such cases varies from very low to very high.

Some reported that only 5% of their agents participated in frauds. Others have totally divergent reports, stating that about 50% of insurers were involved in scams.

The participation rate also varies depending on the premium type. Life insurance fraud cases show a low participation ratio of 7%. However, mortality benefits come with the highest occurrence that reaches even 60%.

Scams are much more expensive than ordinary people may think. The reason is quite simple — car insurance premium users bear the costs of frauds amounting to even $29 billion.

In percentage terms, this accounts for 14% of a standard car insurance premium that beneficiaries are supposed to pay, as car insurance fraud stats uncover.

Even though the volume of claims frauds rose, the UK insurance organizations registered a slight drop of 2% in the value of identified scams. The false claims amounted to £1.2 billion in 2019, which is equivalent to £3.3 million discovered every day.

The UK seems to be among the countries with the highest rate of insurance fraud. Namely, insurers disclosed even 107,000 false insurance claims last year, which is a 5% increase from 2018.

Their overall worth amounted to £1.2 billion. These figures further suggest that 300 new scams are unveiled daily, which is one in every 5 minutes.

The UK insurance fraud statistics reveal a considerable jump in property frauds. Namely, false climbs reached the figure of 27,000. The worth of such frauds in cash is £124 million, 30% more in figures, and 8% in value compared to 2018.

Household frauds, specifically home fires, natural disasters, and renter’s scams, are among the most common insurance frauds that scammers try to commit. Across the UK, there has been an increase in insurance scams by 27%, Out of that percentage, more than 50% are household scams.

21. In Canada, 5% to 15% of car insurance premiums are used for covering undetermined false claims.

Another increase has been recorded in auto insurance fraud statistics. Car insurance scams seem to be the next favorite among the UK fraudsters, according to the figures. Such frauds typically include minor damage schemes, false stolen vehicle claims, and car accident frauds.

The Bottom Line: Is Insurance Scam a Perfect Crime?

Insurance fraud might be a perfect crime. The risk is minimal, while the reward potential is quite high. Even if the experts manage to detect fraud, the chance to administer punishment or a penalty is quite small.

A much better way to combat insurance scams is to prevent them even before they happen. This further implies strengthening portfolios or using machine learning to detect and inspect high-risk policies. Such an approach is bound to give much better results than taking legal actions or pursuing prosecution.

Which insurance company denies the most claims?

Some companies tend to deny the majority of insurance claims, even though they were valid. They do so in order to enhance their financial balance. They even take quite a strange approach to reward their agents who denied claims successfully. What’s even worse, they dismiss those who wouldn’t comply with those orders so as not to harm the victims.

As the final move, they participate in outright scams to bypass paying clams. Those notorious organizations include, but are not limited to, Allstate, AIG, and State Farm.

How many states make insurance fraud a crime?

As an offense that happens when a perpetrator tries to deceive an insurance company with the aim of gathering money that doesn’t belong to them, insurance fraud is considered a crime in all 50 US states. In fact, most of the states have founded fraud bureaus whose main task is to detect and inspect scam incidents.

In the majority of states, fraudulent claims are regarded as either a felony or a misdemeanor, based on the extent and nature of the committed scam. Specific types like health care frauds are considered crimes under federal law.

How is insurance fraud dangerous for the economy?

Insurance scams impact insurance premiums and policyholders to the greatest extent. To recover the money they lose on false claims, insurance organizations have to increase the price of premiums. That way, they pass the expenses of both the fake claim and the combat against the fraud on common policyholders.

What’s more, insurance fraud statistics warn that colossal costs of health care scams are paid solely by the US taxpayers’ cash. The same could also be said for welfare fraud cases. 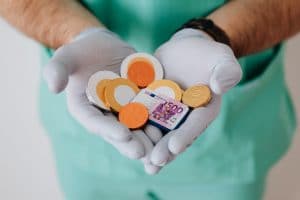 16 Devastating Medicare Fraud Statistics: How Bad Is It?