How many IoT devices are there?

The number of devices that use the internet to communicate with one another is an ever-changing variable. This is why establishing an answer to How many IoT devices are there? boils down to educated guesses rather than exact numbers.

The internet of things includes everyday devices, objects, and sensors that can be monitored and controlled remotely using the internet. In 2009, there were less than a billion IoT devices. By 2015, the number of devices rose to 15.4 billion.

IoT devices are used in consumer, commercial, industrial, and infrastructural spaces. A major portion of IoT devices is designed for consumer use. Vehicles, for example, use IoT technology to report back to the manufacturer, as well as provide us with some modern-day conveniences such as remotely starting, locking, and heating our cars. According to current IoT trends, smart home features, such as Google Home and Amazon Echo, are another major part of the IoT’s market growth.

When it comes to commercial applications, the IoT is mostly used in the medical industry. IoT devices are used for remote health monitoring and emergency notifications, which are especially helpful in senior care. Further implementation of IoT devices in the healthcare industry can save the US more than $300 billion per year, as suggested by Goldman Sachs in their early IoT predictions back in 2015.

Industrial applications of IoT technology mostly revolve around the manufacturing industry. This industry utilizes the technology in order to improve the manufacturing process of new products, collect data on product demands, and supply chain network optimization, among others.

The IoT finds its use in infrastructure particularly via wind-farm monitoring and control and in monitoring and controlling railway tracks, as well as similar urban and rural infrastructural elements. The time saved by increasing the number of devices connected to the internet also saves billions of dollars every year while increasing the efficiency of roads, railways, and energy production across the US.

The IoT in the Past

We tend to think of the IoT as a recent technology. However, it first showed up almost 40 years ago. Here are some important dates from the past:

1. The first device was connected to the internet in 1982.

Even though the phrase “internet of things” wasn’t coined until much later, the first-ever device that was a part of this network was a Coca-Cola vending machine from 1982. The number of connected devices is in the billions nowadays, which was unimaginable to the group of students that used micro switches to transfer information about the vending machine’s inventory and the temperature of the drinks in it.

The term “internet of things” was coined 20 years ago. Kevin Ashton, who worked in supply chain optimization, wanted to attract his senior management’s attention to the new technology called RFID and named his presentation “Internet of Things.”

He knew that the technology would be the next big thing, but the numbers that IoT statistics for 2019 show were not even in his wildest dreams.

LG Electronics came out with the first ever smart fridge back in 2000. The project was started three years prior, and it took 55 researchers and a budget of nearly $50 million to complete it.

The fridge included a display that showed information such as the temperature and the freshness of the stored goods, as well as nutrition info and recipes. A webcam, an MP3 player, and an icemaker were also included.

Considering how many similar devices are connected to the internet today, one would have expected it to be a huge success. However, the project was a failure, as people deemed it unnecessary. The price tag of $20,000 didn’t help either.

The first-ever pacemaker that used the internet to send data was installed in 2009. The IoT was hailed as the biggest step toward immortality in our lifetime. After the pacemaker, insulin pumps and other medical implants that use the IoT were introduced.

So how many “things” are predicted to be interconnected on the internet by 2020? Perhaps the info that over 160 million healthcare devices are estimated to be installed during that year might help paint the picture.

Waymo, previously known as the Google Self-Driving Car Project, was started in 2009. The first vehicle was launched in 2010, and it used the internet to communicate with the server and navigate cities and roads across the US.

Waymo drove over 8 million miles on public streets, and the number of these IoT devices reached 600 in 2018. When it comes to other manufacturers, the total number of self-driving cars is expected to reach 100,000 by 2022, according to CNBC.

6. In 2015, just 3% of the useful data provided by the internet of things was tagged and analyzed.

Back in 2015, the use of the IoT really started to take off. However, the companies that adopted the technology barely used it. It’s estimated that just 3% of potentially useful data was ever analyzed and utilized properly.

Even though the question of how many devices are connected to the internet in 2018 or 2019 has different answers depending on the source, they all agree that the data gathered from them is now used efficiently.

The IoT in the Future

Some predictions on where the IoT is headed in the near future are shared by experts. Here are a few of them:

7. “Anything with a battery will have a network connection.”

This quote is attributed to multiple important tech figures, from Luke Ibbetson to Bill Gates. Whoever was the first to utter it appears to had been right. IoT growth is rapid, and the technology is starting to consume every item imaginable.

Manufacturers are turning every possible device into an IoT one. This ranges from devices that can really benefit from this type of connectivity to some, frankly, pointless ones, such as shoes.

8. 5G Networks will prove to be a massive boost to IoT growth.

The 5G network is the latest talk of the town when it comes to technology. With its arrival later in 2019 and its insane data rates of up to 20Gbit/s, the number of IoT connected devices is bound to skyrocket.

However, the arrival of 5G also raises some safety concerns. IoT devices won’t need Wi-Fi routers, which are a safer option due to the presence of firewalls and password protection, and will connect directly to the 5G network, making them more susceptible to hacker attacks.

As user safety becomes more of a concern, governments across the world will need to start introducing new regulations with safety in mind.

There’ll be over 30 billion IoT devices by 2020. Considering this, the European Union implemented the General Data Protection Regulation in 2018, which addresses several safety and privacy concerns. Driven by their example, several US states, including California, have recently passed more strict privacy laws.

Still, a lot more needs to be done, as security remains the main challenge in the IoT’s future.

Some of the IoT’s uses in infrastructure were already discussed in this text. Considering how many IoT devices there are in 2019, some are bound be used to improve the traffic and infrastructure of our cities.

Cutting back on manpower and employing more IoT technology for traffic monitoring is expected to increase safety and lower the running costs for big cities. With IoT optimization, traffic jams might soon become a thing of the past.

11. More vehicles will depend on the IoT.

Autonomous vehicles, and those that use IoT technology strictly for data analysis, will become more common on the roads in the next few years. Internet-connected devices have existed for a while in our cars, as they provide us with features such as smart driving assistance, car system monitoring, and automated emergency management.

13. Companies are expected to spend more than $5 trillion developing new IoT solutions in the next 5 years.

With this kind of expenditure, we can expect the IoT to be implemented in all parts of our lives; from our health to our clothes. The CISCO IoT forecast predicted that there’ll be 50 billion devices in use by 2020. Even though this forecast isn’t expected to be met and we expect significantly less IoT devices by the time 2020 comes, the amount of money being invested in IoT development remains staggering.

How the Internet of Things Affects Business

Even though the internet of things can help make some simple things in our lives more convenient, this technology’s main application is helping companies cut costs and improve profits. Here’s how it achieves this:

The number of devices connected to the internet will keep rising, as long as there’s data to collect via these devices. This is the key to surviving in today’s market, and it can’t be stressed enough. By gathering data, companies and businesses are able to gain an insight into their users’ habits and demands, which leads to them being able to provide a more accurate service that can then be priced more appropriately.

The IoT makes it easy to track deliveries, and it can even make the human factor in inventory management redundant. Considering just how many devices were connected to the internet in 2017 (around 20 billion), it’s surprising that this was one of the later uses of the IoT. After all, it only started spreading around the business industry fairly recently.

Remote scanners that use IoT technology can eliminate the risk of human error and reduce the need for human involvement in inventory tracking and management to a minimum.

Work productivity and efficiency are increased in multiple ways using the internet of things. One of them is error monitoring. A vast amount of IoT devices are dedicated to operation control in the manufacturing industry. There’s currently no easy answer to the question, How many IoT devices are there in this field? However, their role in error diagnostics and preventive maintenance is irreplaceable and unmatched by humans.

By preventing human error and machine malfunctions, and quickly diagnosing faults, the IoT is able to significantly decrease downtime in production while increasing productivity and efficiency.

Workplace safety is a commonly neglected way to reduce cost. In the long run, it can save businesses millions of dollars in damages, to both property and personnel.

Businesses and individuals have been using internet-connected devices for years in order to improve their property’s safety. Security cameras are one of the oldest uses of the IoT, and they are more efficient today than they’ve ever been before. The days of continuous video streaming and someone staring at them for hours are over; cameras turn on when they sense movement, and they send notifications to those in charge. Modern IoT cameras are also able to recognize faces and objects, and they are an invaluable tool in property protection.

The internet of things and a number of devices in its network can also be used for accident prevention. Sensors that use motion detection and/or body heat for stationary humans are crucial in manufacturing facilities that use hydraulic presses and similar machines.

The internet of things is just at its beginning. We have yet to see the full potential of this innovation, and we can’t even start to guess what technological advancements it will birth. All we can do is slowly start to get a grasp of its inner workings and prepare ourselves for the future that the IoT brings. This means we need to keep our safety in mind at all times, while not forgetting to have fun with the new technology.

As for answering, How many IoT devices are there? That might still prove to be a difficult task. 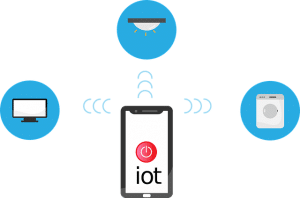